Warning
Our new website is optimized for the most current web browsing technology. If you are using an older web browser, part of our website may not function properly as designed. Please consider upgrading your browser for an error free experience.
Douglas Pest Control
1307 Asheville Hwy, Spartanburg, SC 29303

Do Bugs Attack People On Purpose? 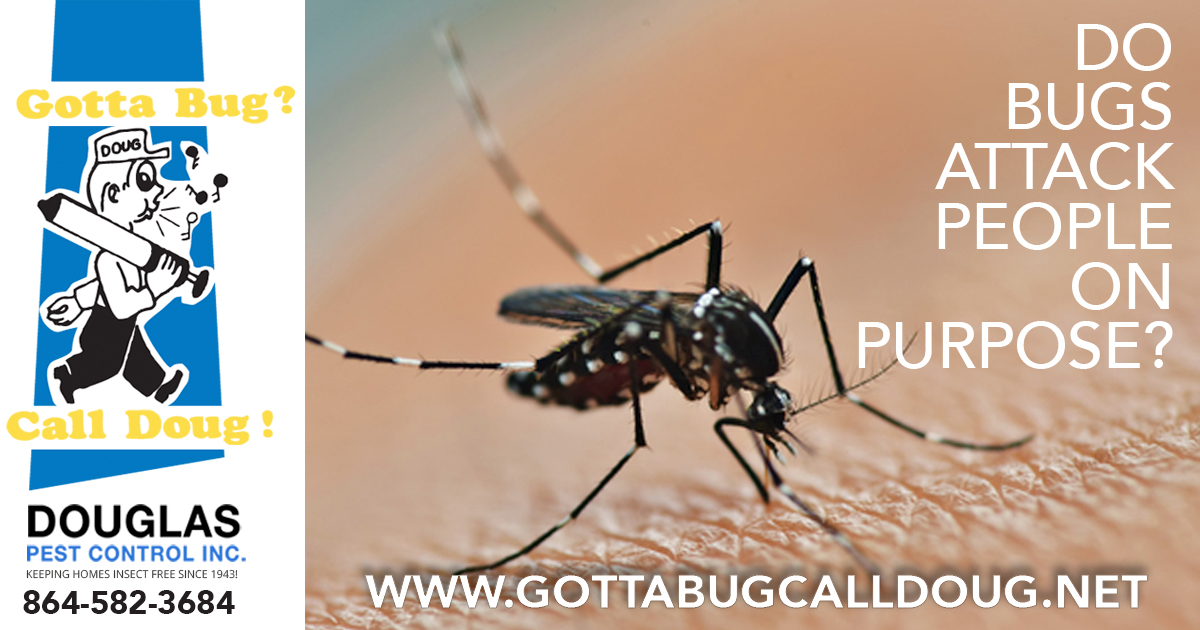 Since they are nothing more than pests who fly/crawl around, it’s easy to believe they are always out to get us. They are pests, after all. What more could they possibly want? Flying and crawling ones ruin family picnics and other outings. Biting ones ruin camping and relaxing by the lakeside. Stinging ones ruin, well, everything. Some people don’t even like going outside because of the insects that seem to surround us.

Well, the answer is yes and no. No, they aren’t trying to ruin your day. They aren’t out to get you. They don’t see their presence as getting in the way of your every day life. But, at the same time, they need you.

Many unwanted pests, such as mosquitoes and the dreaded ticks want to drink your blood. Yes, they are vampires. Like vampires, they need that blood to stay alive. Although you might think your comfort is more important than their lives, you’ve got to keep in mind the bigger cycle of life. Insects are usually food for bigger animals, which are food for even bigger animals, which eventually become food for us. If you want to look at it that way, a mosquito sucks a bit of you blood, but it’s all good. One day, you’ll get to eat him in return. Okay, not for real. But, it might be a comforting thought to some people.

Now wasps and bees are pests, for sure. Read more about 5 Common Pests Found in the South. The sting from these guys actually puts a type of poison into your skin. It’s similar to the same poison a cats claw puts in your skin when they scratch you. That’s why cat scratches swell and it’s also why bug bites/stings swell. Although most wasps seem to be out to get you, it’s only true if you’re near their home. Wasps are very protective of where they live. They tend to attack only when they feel threatened. The best you can do to avoid this is ensure there are no wasps nests on your property. If you find one, call the exterminator to come and remove it quickly.

As for bees, well, that’s a whole other subject. Due to the decrease in bee popularity, bees nests are a rarity. Many people will suggest you simply leave the bees alone, let them do their business, pollinating flowers and what not. Bees won’t sting unless you are harassing them or near their home. Much like wasps, they are largely territorial. At the same time, they recognize that you are much bigger than them and they don’t want to end up squished. If you’re worried about a bee on your property, pick a flower and simply lead him somewhere more suitable.

Remember that even though these bugs aren’t out to get us, many of them carry diseases. So, keep your house and property pest-free. Call your Spartanburg exterminator if you notice any infestations.